🌳ROUND TRIP AROUND HOTEL 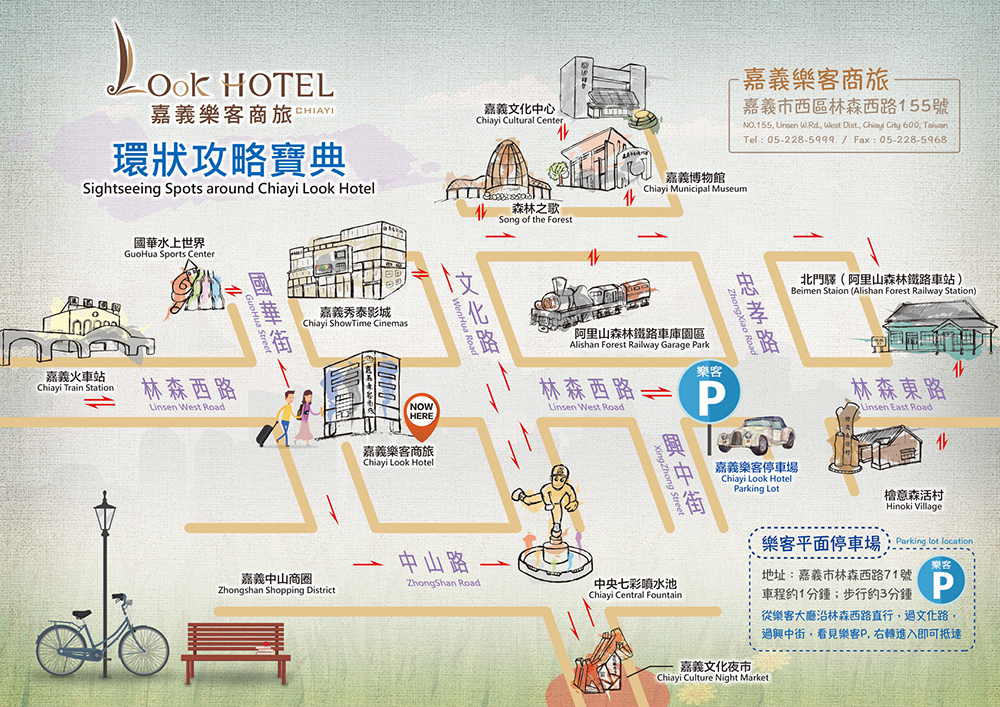 Chiayi Look Hotel is located in the center of Chiayi City, and is very convenient to go to many famous sightseeing places. We will show you how to walk to each of the tourist attractions near us.

From the lobby, along Linsen West Road, the first intersection is Wenhua Road. Please turn right here and go straight for 450 meters to reach the most lively "Wenhua Night Market" in Chiayi City, where it has varieties of food, drinks, fashion wear and accessories on display.

In addition to being close to the Wenhua Night Market, Chiayi Look Hotel is only one minute walking distance away from "Chiayi Showtime Cinema", where you can watch movie, go shopping, and eat delicious food in many famous restaurants as well.

🌳【The Song of the Forest】

The opposite side of Showtime Cinema is "the song of the forest", which is a landmark created by the artist Wang Wen-Chih, who used the wood, railway sleepers, rattan, and rocks provided by the Forestry Bureau to re-create the prosperous "timber capital" of Chiayi.


When the train passes and roars behind this land mark, it sounds like "the song of the forest." Either daytime or nighttime, the landmark looks very beautiful.

After visiting the Song of the Forest, please keep going through the "North Gate Road" nearby, where on this road, there are many spots, such as Alishan Forest Railway Garage Park, Chiayi Lumber Factory, Chiayi Museum, and Cultural Affairs Bureau, Chiayi City. And at the end of this road, you will encounter Zhongxiao Road. If you cross Zhongxiao road, the "North Gate Station" is over there, and this is the train station for taking Alishan Railway to visit Mt. Ali. Let's introduce Alishan Forest Railway Garage Park first.


If you are a railroad fan, it worths to explore here because the collection of the old trains is in large-scale. But even if you are not, you may be moved by the historical significance of these old trains. Besides "Black Head" old steam locomotive, there are also diesel engines, early cypress cars, dining cars, and so on. All of the steam trains in the Alishan Forest Railway Garage Park have a number. Those starting with "1" used to be responsible for the Chiayi to Zhuqi "flat line." As for a number starting with "2", those used to travel the mountainous "woodland line". In the garage you can also see a large piece of round turntable equipment, where locomotives were switched here for changing the trains’ direction. The opening hour of the park is 9:00-17:00 and is free of charge.


After the Japanese found the abundant forest resource in Alishan in 1899, they built the world famous Alishan forest railway to bring the wood from Alishan. And the Chiayi Lumber Factory was exactly the place designed and built for storing and processing the wood. The material industry is no longer in use now, however, the historical buildings and remains with the vast green still forms a rare and serene place in the center of Chiayi city.

After crossing Zhonhxiao road, you will arrive Beimen Station. Actually when you cross the road, sometimes the Alishan Forest Railway Train may pass the road together with you simultaneously whether toward or leaving the Beimen Station, as it is the second stop from Chiayi city to go to Mt. Ali. To go to Mt. Ali, you can buy the ticket here to take the Alishan Railway Train, or you can book the ticket from the official website of the Alishan Railway and take ticket here.

After visiting Beimen Station, and then cross the intersection of Linsen East Road, here you will arrive the most popular tourist attraction in the Chiayi city. The village is made of twenty-eight renovated wooden historic buildings in Japanese-style, where the houses were originally dormitories for officials who were involved in developing the logging industry at Alishan during the time of the Japanese occupation. Since hinoki was the primary constructing material of the buildings, so it is named Hinoki Village.


Now, the old village has been transformed into a creative market for leisure, including specialty and souvenir shops, artistic daily objects shops, coffee houses, creative cuisine restaurants and art galleries. Come here for a trip back to the good old days in the enjoyable soothing atmosphere.

As Hinoki Village is located on the Linsen Road, on which it is the same road as Chiayi Look Hotel located, you can go straight directly back to Hotel in 10 minutes walking distance. Although both Chiayi Look Hotel and Hinoki Village is on the same side of the Linsen Road, it is recommend to go to the other side of the Linsen Road as this is also the same place as the Alishan Forest Garage Park locates. The sidewalk is decorated with the elements of Alishan Forest Railway. Before going back to hotel, it is also recommended that you just go a little bit further, then you will arrive the “Museum of Old Taiwan Tiles”.


The museum founder James Hsu collected the tiles in the old times of Taiwan and created the museum where the ancient building itself is made of Taiwan cypress. The tiles collected or we could say saved from the ruins or old buildings from the Japanese colony times are very precious and meaningful, with floral or auspicious patterns, they were the symbol of the nobility and royalty during the old times.